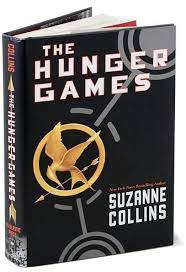 The Hunger Games was published in 2008 by Suzanne Collins to major success. It stars Katniss Everdeen as she is entered the ruthless Hunger Games to protect her sister, Prim. A movie adaptation was made four years after its release.

I recently reread The Hunter Games. I barely remembered anything from it seeing as the last time I read it was in fifth grade, but I don’t remember feeling strongly about it.

For the most part, I still feel neutral towards it. It’s a fast read and it’s pretty engaging, but I didn’t feel particularly attached to many of the characters. The characters that I did like (Prim, Rue, and Thresh) were not present for the story or killed off quickly after their introduction. It was entertaining to watch Katniss especially because she’s so capable, but I wasn’t really attached to her. That was the same case for Peeta. He was just kind of there.

The story moves very fast, so there really isn’t a place to get bored unless you are really uninvested in the story. I really like how Suzanne Collins didn’t push the romance. Katniss doesn’t really get attached to Peeta too much at least not in the romantic aspect. It’s hinted at for the later books, though, so it doesn’t seem completely out of the blue.

One of the complaints that I had that at the beginning, within the first 120 or so pages, is Katniss kept on flip flopping between if she trusted Peeta or not. One second she’d be saying that she wouldn’t trust Peeta even though he was nice and then she realized she had trusted Peeta and start back at square one. This happened a few times, but it had mostly stopped by the time the games had reached their peak.

For the most part, it is a pretty good book. I’ve just recently started Catching Fire which is where some of my favorite characters come in, so maybe it’ll be even better.